Reports are out claiming that Manchester United boss Louis van Gaal is keen to revive their bid for Athletic Bilbao midfielder Ander Herrera. 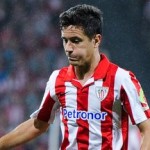 The Daily Mail reported that Herrera was a target for David Moyes last summer and he had considered returning with a bid after following the 24-year-old’s progress.

United were keen to see if Herrera would see out his contract and join next summer as a free agent, however, Spanish radio station Cadena Ser last night reported a bid had gone in and talks are expected to conclude a transfer over the coming days.

The deal would cost United £31million for a stylish midfielder who has also been courted by Manchester City and Barcelona.