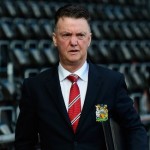 It has been reported that Ronald de Boer says Louis van Gaal will not be happy with Manchester United’s playing style.

The Dutch tactician has been criticised for United’s possession game.

“Not with the amount of points he’s got, but with his style. It’s not the way he wants to play. He’s fighting to get there.

“At the moment it’s not the football that we are used to with Louis.”