It has been reported that new Manchester United boss Louis van Gaal is unimpressed by the club’s training facilities. 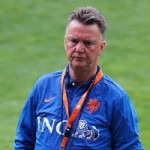 The Sun reported that Van Gaal has ordered Manchester United staff to rip up the club’s Carrington training ground pitches as he rings the changes at the club.

It is said that the 62 year old is keen for the Desso Grass-Master system to be installed ready for when he takes charge after managing Holland in this summer’s World Cup finals.

The Dutchman’s request has stunned the United hierarchy who believe their pitches are already pristine.