Reports are out claiming that Manchester United boss Louis van Gaal is unsure of keeping hold of Javier Hernandez. 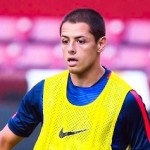 The Mexican international striker is currently with the United squad in the US.

The Dutch tactician was asked after the friendly win over Inter Milan in Washington whether he would consider selling Hernandez.

He replied: “That I cannot answer because he is a player of Manchester United at this moment.” BREAKING NEWS: Moyes confirmed as the next Man Utd manager