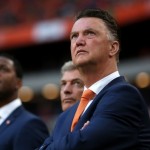 The Daily Star reported that United will offer £40m for the former Arsenal star and are willing to make him one of the highest-paid players in their history on £250,000-a-week.

Arsenal are also keen on resigning him.