Interesting transfer news are out claiming that departing Barcelona midfielder Xavi is being linked with a shock move to Manchester United. 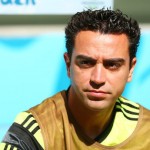 Xavi has confirmed to friends and teammates he is leaving Barca this summer and plans to continue his career abroad.

Sport reported that new United boss Louis van Gaal wants a reunion with his former Barca protege and expressly asked his employers to move for the veteran.

Van Gaal has no doubts about Xavi’s ability to compete at the highest level and United reps have been speaking with a close confidant of the playmaker in an attempt to convince him about moving to England.

For the moment, Xavi has told the fallen English giants to wait, as he assesses other options and whether mentally he feels confident of taking on the expectations of playing at Old Trafford.