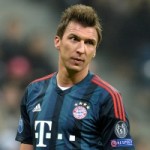 The Daily Star revealed that Arsenal and Chelsea are both interested in the Croatia international striker.

However, their move could be gatecrashed by new Manchester United boss Louis Van Gaal, who reportedly wants to take him to Old Trafford.

Mandzukic is valued at around £20m and has been told he can leave the club after a fallout with boss Pep Guardiola.