It has been reported that Manchester United boss Louis van Gaal has warned fans not to expect a rip-roaring performance against QPR tomorrow. 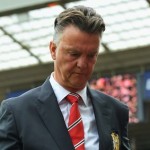 The Dutch tactician believes it will take time for all the new players to gel.

He said: “What the fans are expecting and what I expect are different, I believe. The fans will expect a new start of course and with these kind of players a victory.

“But I know as a coach that when you let go 14 players and buy six new ones you have 20 different relationships in the dressing-room. The hierarchy has gone. Now we have to build up a new one and that always needs time.”