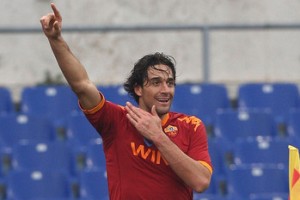 Italian international striker Luca Toni has revealed that he wants to win the Scudetto with Roma.

The on-loan Bayern Munich striker is currently out injured after tweaking his knee against Juventus, but already has two goals for his new club.

Speaking to reporters, Toni said that he will be back soon and that he feels better.

Toni then said that he cannot know today when he will be ready again, but is convinced that he will not have to wait too long.

The striker then said that he would like to play against Palermo on February 14.

He then went on to say that he is here to win something and soon he will.