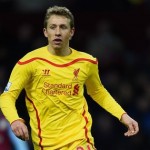 Liverpool midfielder Lucas Leiva has declared that they must bounce back against Arsenal today.

The Reds are still licking their wounds from defeat to Manchester United.

Lucas told liverpoolfc.com: “We remember the semi-finals against Chelsea and I know we ended up losing the game after extra-time, but I think we created a lot of chances to win the game and we should take that into the Emirates against Arsenal.

“We are on a good run and that was our only league defeat in 2015 which gives us confidence to keep going and try to win the game, because it will be important if we want to close the gap for the top four.”