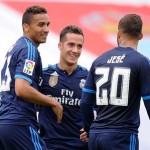 Reports are out claiming that Real Madrid winger Lucas Vazquez was delighted to be part of their 3-1 win at Celta Vigo.

The victory sees Real clear at the top of the table.

Vazquez said, “We have to be happy with the win. We found life difficult at the end because of the match we played on Wednesday. It meant that we were more tired, but that’s something we just had to get on and deal with. You also have to give Celta credit. They looked to put us under pressure right to the end on their own ground and we had to dig in, but we got the three points won, which is the main thing. The team are in good form and we have to keep it up.

“The team always play on the attack, we had more than 20 attempts on goal and we’ve won the game 3-1. There’s nothing defensive about us. In the first half the team put in a really good display, carving out openings up front and doing well at the back, and that’s what we have to come away with.”

Jose Mourinho Wants To Coach In The MLS