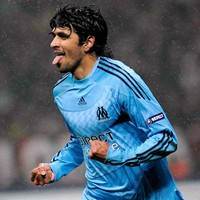 Interesting transfer news are out and it has been revealed that Arsenal are interested in Olympique Marseille midfielder Lucho Gonzalez.

The 31 year-old Argentine is available from l’OM and been the subject of enquiries from AS Roma and Malaga.

According to Le Parisien the Gunners are also interested in Lucho and have made an approach to Marseille to open talks about a move to London.

The midfielder is on £2 million-a-year and refuses to consider taking a pay-cut if he is to leave Marseille.