It has been reported that Barcelona boss Luis Enrique has played down his record-breaking start to his Nou Camp career. 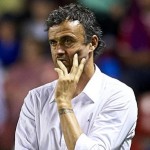 The 44 year old, who replaced Gerardo Martino this summer, could barely have had a better introduction to life in the Barca hotseat, leading the Catalan giants to five successive wins in the Primera Division and Champions League without letting in a single goal.

That is only the 10th time Barca have taken maximum points from their opening four league games, and the first time they have managed it without conceding.

Despite that, though, Enrique is refusing to get carried away with his side’s achievements – and says there is still room for improvement.

Speaking ahead of Wednesday’s trip to Malaga, Enrique said “From March we’ll see who aspires to win the league. The objective is to get to that point with options to win all the competitions.

“Nobody wins the league in September, October, November, December, January or February. From March we’ll see who is in a position to do it.” Lionel Messi : I Have No Battle With Cristiano Ronaldo!