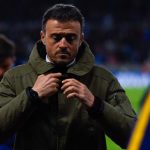 It has been revealed that Luis Enrique is happy to stay on with Barcelona next season.

Though a consecutive Treble has been dashed, Barca are on track to win the La Liga title and Copa.

Sport says the coach has told close friends he’d be happy to remain at the Nou Camp.

Despite some concern with the strength of his squad, Enrique is happy with the team’s progress and potential.

He has already spoken to some locker room leaders about next season and to assure them he intends to remain.

Xavi Hernandez Set To Be Sidelined With Calf Injury