It has been reported that Real Madrid legend Luis Figo has announced he’s standing for the FIFA presidency. 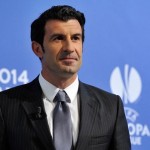 “I am worried for football and the image of Fifa,” Figo said.

“If you search Fifa on the internet, you see the first word that comes out: ‘scandal.’ Not positive words. It’s that we have to change first and try to improve the image of Fifa. Football deserves much better than this.

“I’ve been talking with important people in football — players, managers, presidents of federations — and they all think that something has to be done. Last year was the World Cup, I was in Brazil and I saw the reaction of all the fans regarding the image of Fifa and I think something has to be changed.” Mourinho : We Deserve To Beat Barcelona!