Liverpool striker Luis Suarez has declared that he is fully fit for Uruguay’s World Cup clash with England. 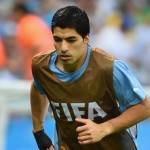 The 27-year-old had to have surgery on the knee but he insists there was never any doubt about his participation in the tournament.

“At no moment did I think I would lose the chance of playing in the World Cup. I’ve never thought that during my recovery,” said Suarez, who scored 27 Premier League goals last season.

Suarez trained with his team-mates at Uruguay’s base on the outskirts of Belo Horizonte on Monday.

Uruguay coach Oscar Tabarez refused to say whether Suarez would definitely start against England, though.

“It is a possibility, I can say no more,” Tabarez told a press conference. Southampton Not Interested In Selling Victor Wanyama To Arsenal, Tottenham