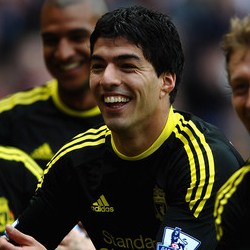 Luis Suarez has revealed that he is eager to build on his first six months at Anfield.

The Uruguay international has scored four goals for Liverpool but caught the eye as much for his assists, most notably in a memorable 3-1 defeat of Manchester United in March.

Suarez told LFC Weekly: “I think I have settled in well, which is very, very important.

“Settling into a new team was always the most important thing about coming here.

“I think I have done that and it’s happened a lot quicker than I thought it would.

“It’s hard when you come to a new team for the first time as there are lots of changes that you’ve got to adapt to but it’s gone well – and from the very first game really. I am very, very happy here.”