Luis Suarez has revealed that it is “very easy” to play with Barcelona star Lionel Messi. 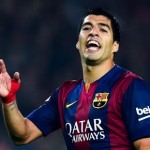 The former Liverpool striker also insists he hasn’t had to sacrifice his game to accommodate the Argentine.

“It’s very easy. I enjoy playing with Messi. Obviously being the forward I would like to score more goals. But while the team does well there is no problem. It is incredible to watch the best player in the world.

“Playing with him, he has silenced all doubts I had about the team and about him. His game benefits the team,” Suarez told Sport.

“We do not play only for Messi. We play for eachother. The priority is that we know that there are players that make a difference like Messi, Neymar and Iniesta.

“We try to rotate according to the timing of the match to help the team. I try to combine with Ney and Messi to create scoring chances for eachother.” Barcelona Have To Admit, Inter Were the Better Team – Mourinho

Barcelona Shopping For Midfielders In France