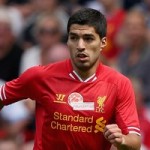 It has been revealed that former Tottenham and Liverpool football chief Damien Comolli can see Luis Suarez moving to Arsenal.

He told talkSPORT: “I think another aspect is knowing that he’s going to work with one of the best managers in the world at Arsenal, as far as developing strikers is concerned.

“Suarez is probably thinking I’m going to become a better player and on top of that I’ll play in the Champions League.”

Wenger : Jack Wilshere Is Ready To Play For England Liverpool Keeper Mignolet Admits Toure Called On Him At Arsenal