It has been reported that Luis Suarez has hailed the qualities of Liverpool captain Steven Gerrard. 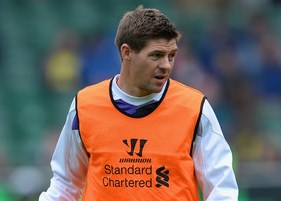 The Uruguay international striker insists Gerrard’s modest ways and understanding of his team-mates has helped them get to such a position.

“He brings a lot to the group and really is a true captain in every way because he always respects the decisions of others despite being the captain and having more than 15 years at the club.

“His word is no greater than any others, he respects the players and that’s how good he is.”

The 27-year-old also says Brendan Rodgers has done a fine job of gelling a group of young and experienced players to form a title bid.

“There is a lot of potential, there are very young players. They’ve played a lot this year and with a couple of good players that bring experience to the team, but the person in charge of it all is the manager.”