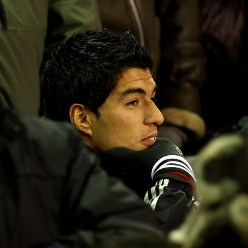 Luis Suarez has admitted that he is ready for the abuse which will come his way from Manchester United fans today.

The Uruguay international insists he will take on Manchester United and their angry fans with his head held high.

Suarez fiercely proclaimed his innocence but was found to have racially abused United’s Patrice Evra at Anfield in October.

The FA banned him for eight matches.

However the former Ajax star insisted: “I’m prepared for the pressure and the protests at Old Trafford.

“I have played in South America in terrific atmospheres and have no fear. I like to think that United fans understand football.”

Ashley Young Backing Man Utd To Get Back Into Title Race