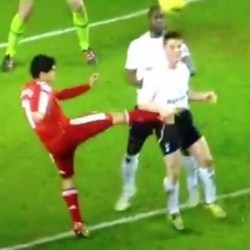 Luis Suarez has become embroiled in yet another moment of controversy during his return from suspension, with Manchester United star Wayne Rooney claiming the Liverpool striker should have been sent off in Monday’s 0-0 draw with Tottenham.

The Uruguay international was shown a yellow card for catching Spurs midfielder Scott Parker with a kick to the stomach, but Rooney believes the striker should have been sent off.

“If ref sees that kick from Suarez and books him for it, it should be red,” Rooney said via Twitter.

What do you think? Was it worthy of a red card? Watch and decide for yourself. TFM believes Luis Suarez’s action was intentional.