It has been reported that Liverpool have agreed to sell striker Luis Suarez to Barcelona for a fee thought to be about £75m. 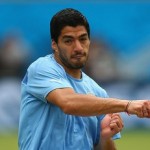 It is said that the Uruguay international will sign a five-year deal and will travel to the Spanish club next week for a medical.

“Luis is a very special talent and I thank him for the role he has played,” said Reds boss Brendan Rodgers.

“I hope you can all understand why I have made this decision,” said the striker, who is banned from “all football-related activity” until the end of October as he serves his third suspension for biting an opponent.

“This club did all they could to get me to stay, but playing and living in Spain, where my wife’s family live, is a lifelong dream and ambition. I believe now the timing is right.”

“It is with a heavy heart that I leave Liverpool for a new life and new challenges in Spain,” added Suarez.

“You have always supported me and we, as a family, will never forget it. We will always be Liverpool supporters.”

In his statement, released on Liverpool’s official website, Suarez concluded: “Thank you again for some great moments and memories. You’ll Never Walk Alone.”

“The club have done all they can over a sustained period of time to try to keep Luis at Liverpool,” added Rodgers.

“It is with great reluctance and following lengthy discussions we have eventually agreed to his wishes to move to Spain for new experiences and challenges. We wish him and his young family well; we will always consider them to be friends.”

I Got Cocky For Third Penalty – Gerrard