It has been reported that the legal team for Barcelona striker Luis Suarez are confident of having his biting ban reduced. 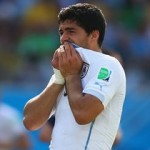 It is said that lawyers believe they can persuade the Court of Arbitraton for Sport (CAS) to halve the four-month ban imposed by FIFA for biting an opponent when the appeal hearing takes place on Friday.

FIFA imposed a four-month ban from all football-related activity, plus a nine-match international ban and a £66,000 fine after Suarez bit Italy’s Giorgio Chiellini during Uruguay’s 1-0 win on June 24. FIFA’s appeal committee later upheld the sanctions.

Suarez’s lawyer and adviser Alejandro Balbi, who is also a member of the Uruguay FA’s (AUF) executive, admitted there was less chance of overturning the nine-match ban, but said there is scope for the four-month ban to be reduced on the grounds that it infringes the player’s “fundamental rights”.

Balbi told El Observador: “It would be more logical to reduce the sanction by a few months than to reduce the ban concerning international games, because legally it’s easier to contend against the terms of the suspension that forbid him from training and from being at the club, because they violate fundamental rights.

“The other ban (the nine-match ban for Uruguay) is more a question of the level of the punishment.”

Messi : Mascherano Would Be Great For Barcelona!

Dani Alves : We Want To Win The Copa del Rey!