It has been revealed that Luis Suarez enjoyed a winning debut for Barcelona in the Gamper Trophy last night. 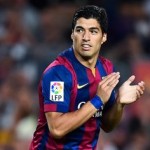 The former Liverpool striker came off the bench to make his first appearance for Barcelona in a 6-0 thrashing of Leon in Monday night’s friendly match at the Nou Camp.

The 27-year-old, who was cleared to make his debut in the friendly by the Court of Arbitration for Sport, despite currently serving a four-month ban for biting Italy defender Giorgio Chiellini during the World Cup, was named on the bench.

Suarez is not permitted to take part in a competitive match until October 26, when Barca face Real Madrid at the Bernabeu in the first Clasico of the season.

However, the sanctions against the striker were relaxed so he is not banned from friendly games, training, promotional activities and administrative matters.

As expected, Barcelona dominated the match and were four goals to the good thanks to Lionel Messi’s third minute opener, a first-half brace by Neymar and Munir El Haddadi’s 55th-minute effort by the time Suarez was introduced in the 77th minute.

The £75million-man replaced Rafinha to a huge ovation and no sooner had he joined the action another goal was added, but it was not from the boot of the Uruguay striker but a second for El Haddadi.

Sandro then wrapped up the win with the sixth goal in the 90th minute.

Barcelona To Use Money From Cadena COPE To Sign Cesc Fabregas