Reports are out claiming that Luis Suarez has welcomed new teammates Arda Turan and Aleix Vidal at Barcelona. 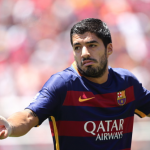 The pair are training with Barca, but cannot play in their US tour games.

The former Liverpool striker said, “Arda Turan doesn’t speak much Spanish but we’re able to speak a little bit in English. Things are also going well with Aleix Vidal. Both of them are very talented, which they’ve already shown with their previous their clubs.

“They’ve come to help contribute in any way they can. It’s a shame we have to wait until January to see them in an official match.

“They’re in a strange situation; it’s different. They train every day but can’t play in games. They know what’s going on, which is similar to what happened to me.”