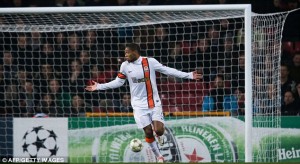 Luiz Adriano prompted widespread condemnation and boos from the FC Nordsjaelland crowd after scoring one of the most controversial goals the Champions League has seen, netting after an injury to an opponent, as Shakhtar Donetsk reached the last 16 on Tuesday.

The Brazilian bagged a hat-trick in the 5-2 Group E win in the Danish capital but the game turned on an unsavoury episode after 26 minutes.

Seemingly unaware that his team-mate Willian was attempting to pass the ball back to Nordsjaelland’s goalkeeper after Morten Nordstrand had receieved treatment, Luiz Adriano raced clear of the bemused defence, rounded the goalkeeper and slotted the ball home to make it 1-1.

An attempt for Nordsjaelland to walk the ball into Shakhtar’s net to cancel out the goal was stopped by a visiting defender, further enraging the hosts and crowd.
‘Their striker didn’t get it,’ Nordsjaelland captain Nicolai Stokholm said. ‘I looked down at my armband, and there’s something about respect – it has to be said we didn’t see much of that.
‘We thought that they would give us a goal. Half their team seemed to think so too, but the other half didn’t.’