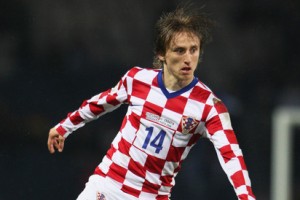 Interesting news are out and it has been revealed that Tottenham midfielder Luka Modric would consider a move to Manchester United.

Croatia international Modric and David Silva, of Valencia, are among those he has identified to bring more creativity to the United midfield.

Modric has been alerted to and attracted by the possibility of moving to Old Trafford, but may be inclined to stay at White Hart Lane now that Tottenham have the prospect of Champions League football next season.