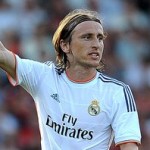 The 27 year old is ­prepared to refuse to be part of Real ­Madrid’s world record package to sign Tottenham star Gareth Bale in the hope United bid for him.

Spurs would like to re-sign ­Modric, either as part of Bale’s expected switch to Real or independent of that transfer.

Modric is ­understood to have no intention of moving back to White Hart Lane, as he waits to see if Moyes firms up interest in him with an official bid.