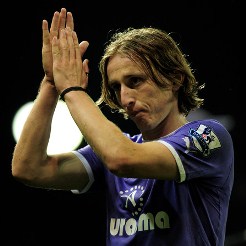 Tottenham midfielder Luka Modric feels he and his teammates should have came away with a win from their trip to Stoke City yesterday.

Spurs’ run of 11 matches undefeated (10 of which were wins) came to an end at the Britannia Stadium with a 2-1 result going the way of the Potters but Modric believes he was on the better side despite the home team scoring twice in the first half.

“”We lost in the first half,” Modric told the club’s official website.

“We started sloppy, every corner kick and every throw-in was a problem for us. We couldn’t deal with them and they scored two goals.

“After half-time we changed a bit tactically and we played much better. We created so many chances. I think the disallowed goal was a goal, and we fought hard, we tried to come back and tried to win the game, or at least to draw, but we didn’t make it.

“We need to be happy with how we played in the second half. We just can’t allow ourselves to play so badly in the first half. It’s costly.

“Every run comes to an end but we didn’t deserve to lose.” Mertesacker Blasts Arsenal Pal Coquelin: There Was No Danger!