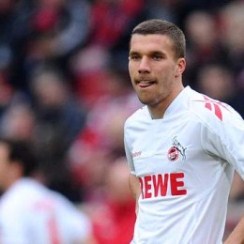 Reports have emerged that FC Cologne star Lukas Podolski will choose Arsenal over a Russian pay-day this summer.

The Guardian reported that the Germany international rejected a lucrative offer to join Anzhi Makhachkala in favour of a transfer to Arsenal in the summer, despite the money-flushed Russian club having proposed a contract worth twice as much as that to be signed by the Germany forward at the Emirates Stadium.

The 26-year-old is expected to complete a £10.9m move from Köln to the London club at the end of the current campaign and will commit to a four-year deal that, according to sources in Germany, is worth around £100,000 a week when signing on fees and associated bonuses are taken into account.