It has been reported that Arsenal attacker Lukas Podolski has again declared he’s likely to leave in January. 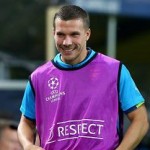 The German international was not involved in the opening four matches of the season following Germany’s successful World Cup in Brazil, and has since spent the majority of his time on the Arsenal bench.

“I have assessed my position in the team, and it has to change now,” Podolski told reporters after obtaining his 120th cap for Germany in the 1-1 draw with the Republic of Ireland on Tuesday.

“Let’s see what happens in the winter. The fact is that I’m not happy with it, that’s clear.”