Lukas Podolski is convinced that Arsenal can make a big title statement during the festive period. 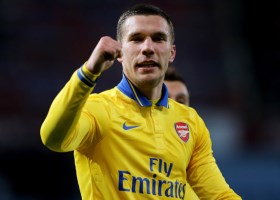 With the club’s early-season injury problems gradually clearing up, the German international striker has urged his side to put their foot down in the race to land their first league title since 2004.

“I remember last season we had a lot of injuries, and a lot of problems,” said the former Cologne man.

“Now we have only one or two so it is good. Of course, I was happy to score a goal against West Ham.”