It has been reported that Lukas Podolski can feel the pressure lifting at Arsenal after winning the FA Cup. 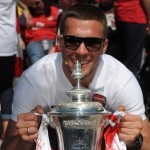 The German international striker has been a key member of the squad this season and knows just how important the victory against Hull City was.

The 28 year old said : “You win nothing for nine years so it is special for us,”.

“We have to come and celebrate now.

“It is a lot of pressure but in the end it is a cup game and, in the end, it can happen. We were 2-0 down and came back, it was a great match and we had the cup in our hands.

“We have a great spirit in the team. Everybody is a part of this and you see in the last matches we did well, getting fourth place and now winning the FA Cup.

“It was a special cup game because Hull fought great and played great but in the end we have it.”