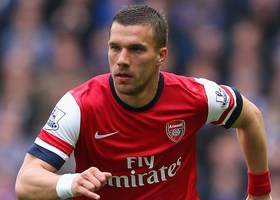 The German international striker insists Wigan have “no chance” of winning at Wembley if the Gunners produce their best form.

“It’s always like this in the football business — when you win something, you are the best, you are the hero,” he said. “When you win nothing or you lose a couple of matches you are like nothing for the people and for the newspapers, the TV and the fans.

“But this is a part of business and sport and football. You win together and you lose together but you must concentrate on your job and forget all the other things that have happened. We have the chance now for the FA Cup and we will see what we can do tomorrow — and I can promise we will give all of what we have to go through to the final.

“Everyone thinks they [Wigan] are a small team or that Arsenal will win the game easily.

“But they will concentrate and focus on this game — it’s one of the biggest games for the club, for Wigan in the last years so it won’t be easy.

“But I think we are strong enough, playing in London so it’s nearly a home game for us. I think it will be a great atmosphere and it will be my first match there.

“If we play with spirit and fight and play our game, then they have no chance to win against us.”