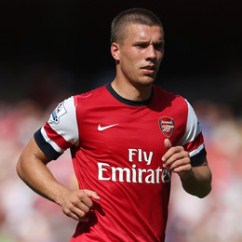 Lukas Podolski is convinced about the potential of his strike-partnership with Santi Cazorla.

The Germany international, signed from Cologne in a reported £11million deal, feels it is a combination which can prove electric.

“We play [well] together and you could see it here – he passed for me for the first goal, I passed to him for the second goal.

“But we are only three matches in. We have 35 matches more so we must keep going.”

Podolski added: “At Arsenal, I not only play on the line, but I can go in the middle and play with Santi and Abou Diaby and Mikel Arteta.

“This is my style of football. I like this, but it is not only about one match – I want to play more of these matches.”

Yaya Toure : I Was Not Good Enough For Arsenal!

Arsene Wenger : Arsenal Will Do Anything To Keep Hold Of Robin van Persie!

Andrey Arshavin Denies Anzhi Link : I Will Only Play For Arsenal!