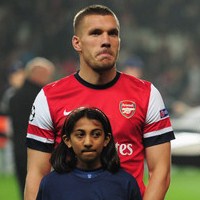 The German international striker has failed to hit the net consistently and is becoming increasingly frustrated at being played out of position.

It is said that the 27 year old who was signing for £11million from Cologne, is said to be fed up of running up and down the wing and wants to play in his natural position.

He admitted he needs to play much better — and for that to happen he wants to play up front.

Podolski said: “I’d rather play as a central attacker.

“On the left I have to do a lot of defensive work, constantly running up and down. I am not a classical winger.”

“I am getting along well, for sure, but I demand more of myself. I want to play even better.”

Given Theo Walcott has also publicly demanded a central role Wenger is left with a real problem.

I Only Wanted To Come For Arsenal! – Yaya Sanogo