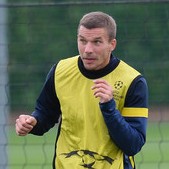 It has been revealed that Arsenal striker Lukas Podolski will be fit when Germany meet the Republic of Ireland tomorrow night.

The 27-year old has scored four goals in nine appearances for the Gunners since his summer move from FC Cologne but is suffering from a knock on his ankle received in the weekend’s 3-1 win over West Ham United.

However, Die Mannschaft assistant coach Hansi Flick says that Podolski, as well as young gun Mario Gotze, will both be fit for the World Cup qualifier with the Irish.

“Today was the first day that every player was there,” he told reporters at a press conference.

“Yesterday Lukas and Mario received treatment. Lukas Podolski had some problems with his ankle, Mario with some muscle problems. We decided to spare him towards the end of training today when it became a bit more intensive. Gotze did individual training.”

The duo are expected to play when Germany head to Dublin for the Group C clash with the visitors sitting on top with two wins from as many outings whilst the home side have one victory from their opening fixture against Kazakhstan. Real Madrid To Include Morata In Bid For Arsenal, Man Utd Target Aubameyang