It has been reported that Lukas Podolski’s future at Arsenal remains clouded. 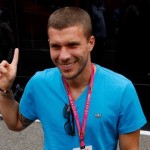 The Mail on Sunday reported that Podolski was left out of Arsenal’s squad for their match against Everton.

The 29-year-old German international has been linked with a number of clubs, including Galatasaray and Wolfsburg while the Italian press claim Juventus are close to a deal for the former Bayern Munich man.

And there now appears to be some grounding to those rumours after Podolski posted a picture of inside Cologne’s stadium while his team-mates prepared to face Everton.