It has been reported that Lukasz Fabianski feels Arsenal can now win trophies regularly after lifting the FA Cup. 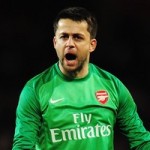 The final marked the Pole’s last game for Arsenal before moving to Swansea City.

Fabianski told talkSPORT: “What Arsenal were missing was that trophy to be honest. But with that we won this year it gives you the belief that this team is able to do big things.

“The other issue was we lost a few key players in the important part of the season.

“The bigger thing was to win the trophy though, so it gives you that extra belief that they can fight for the title next year.”