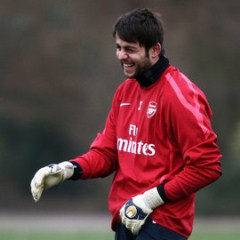 Lukasz Fabianski has revealed that Arsenal are ready to go one better this season in the Carling Cup.

Fabianski hailed the spirit of the Arsenal team after they came from behind to win.

The 2011 finalists are two steps from a return to Wembley and their goalkeeper is determined to lift the trophy this time.

“This year we are trying to go for that trophy, to win it,” he told Arsenal Player.

“I think there is a big desire to do it.

“When you saw the team on Tuesday it was a mixture of experienced and young players. Since I have been here every single season it looks like that. All the youth players, players from the Reserves, they have an opportunity to show themselves. Every single year they are proving that they deserve to play for Arsenal.

“It was a good result against Bolton, especially after we conceded a goal early in the second half.

“We came back really quickly and scored two fantastic goals. Then we had to defend well. I think we have done that and we can be quite pleased with our performance – and the win, obviously.” Exit is a “massive wake-up call” for English football – Wenger