It has been revealed that Manchester United left-back Luke Shaw has overcome his initial struggles at Old Trafford and feels more comfortable in Louis van Gaal’s side this season. 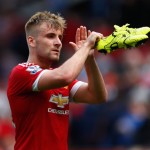 The 20-year-old England international left-back claims that he feels in better shape than when he was at Southampton even though he was criticised for being a bit off the pace in his debut campaign with United.

“Obviously last season was very difficult for me,” he said.

“I just feel fresh and fit and hopefully I can get a run of games now and keep my performances up.

“I trained before I went back to pre-season. That was a massive help to me and now I just want to keep on playing well.

“It was made hard with the injuries that I picked up. I didn’t expect that to happen as much as it did.

“I think that is what knocked my confidence down, I never got fully fit, so whenever I was playing I wasn’t at my best and I didn’t feel at my best. Now I am playing and I feel great.

“To be honest I feel better than I did at Southampton.

“Game by game I feel like I’m getting stronger, especially in training. I just want to keep it up now and pray there are no injuries.” Wayne Rooney Struggling To Be Fit For Chelsea Clash