It has been reported that Luke Shaw has admitted that his move to Manchester United has felt like a “natural progression”. 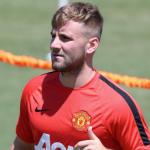 The England international barely had 12 months of Premier League football under his belt before United snapped him up from Southampton.

“It feels like natural progress now because it was a long time coming,” he told manutd.com.

“I knew that United were interested and it was something I wanted to get done before I went to Brazil for the World Cup. But it didn’t happen so we got it done when I got back. Then I had a week to catch my breath, to think about the World Cup and look ahead to the coming season.

“It was important for me to sit down and think about things. It’s been a massive two years and I wouldn’t have done it without my family. They’ve been a massive part of it for me. I’ve got to do it on the pitch but my family have had to travel a lot to take me to training and to games.

“It’s something that I thank them for and they know that. It’s been a crazy two years and I’m just looking forward to playing for Manchester United and pushing on now.”