Reports are out claiming that Manchester United boss Louis van Gaal has some defensive decisions to make on Monday afternoon. 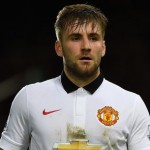 The Red Devils take on Arsenal in the FA Cup at Old Trafford on Monday night but will be without central defender Jonny Evans for the quarter-final clash.

?Northern Ireland international Evans will serve the first of his six-game ban for spitting meaning van Gaal has to choose who he brings in to fill the void.

?It has been suggested that left-back Luke Shaw is ready for selection after missing the 1-0 win over Newcastle United on Wednesday with a hamstring problem while Phil Jones is also set to return.

?Shaw could go straight to left-back, pushing Marcos Rojo alongside Chris Smalling in central defence, or Jones could step straight into the centre-half role in what is a huge decision for van Gaal against a dangerous Arsenal attack consisting of Alexis Sanchez, Olivier Giroud, Danny Welbeck and Mesut Ozil.? Ivan Gazidis Convinced Arsenal Can Be Successful Without Spending Big