Reports are out claiming that Southampton fullback Luke Shaw is determined to leave St Mary’s this summer. 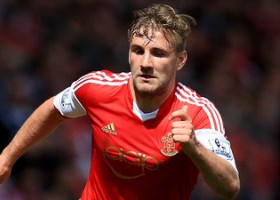 The Daily Mail claims that Shaw is unwilling to delay his move to a big club any longer.

Manchester United and Chelsea are both keen on him and the teenager is worried that he may miss the boat if he gives it another year on the south coast.

The 18 year old is now preparing for a move to Old Trafford, where he feels he has a better chance of regular first team football than at Chelsea.