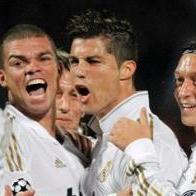 The result means that Real, with four wins from four so far, are guaranteed a place in the last 16 of the competition.

Ronaldo, who brought up his personal landmark in just his 105th match for the club, scored both goals, backing up a first-half free-kick with a second-half penalty.

After Ajax eased to a 4-0 victory over Dinamo Zagreb in the other Group D game, Lyon now face an uphill task to reach the last 16 themselves for a ninth successive time.