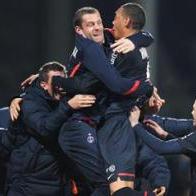 Lyon had twice held two-goal leads in the match after a brilliant first half which saw them recover from Hoarau’s opener with goals by Bafetimbi Gomis, Lisandro Lopez and Michel Bastos.

Nene’s penalty saw PSG pull one back but Jimmy Briand restored Lyon’s two-goal advantage. However, Ceara narrowed the gap once more and, with full-time fast approaching, Hoarau timed it to perfection to score a dramatic equaliser.

The draw saw PSG overtaken by Montpellier at the Ligue 1 summit but Carlo Ancelotti’s side were nevertheless jubilant at the final whistle.