It has been reported that Olympique Lyon president Jean Michel Aulas has cast doubt over a deal for Manchester United fullback Rafael. 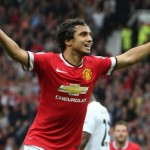 The Brazilian international was linked with a move to OL over the weekend.

However, last night Aulas admitted OL could be gazumped in their bid for the United defender.

“He is no longer a current target,” said Aulas, “we have been overwhelmed by another rival.”

Rafael is also in talks with Benfica and Galatasaray about a move away from Old Trafford.