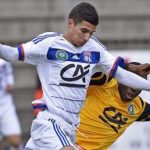 Reports are out claiming that Olympique Lyon are expected to soon announce Houssem Aouar has signed a first pro deal.

Arsenal and Liverpool are keen on the 17 year-old, but Foot Mercato says OL president Jean-Michel Aulas has successfully secured Aouar to a pro contract.

Lyon scout Gerard Bonneau has said of the youngster: “Houssem has the technical ease, the good vision that allows him to see quickly. He has two feet, can speed up the game, but also can keep the ball at his feet when necessary, besides he has the ability to beat players one against one.

“This is a second striker or a playmaker, but he has this quality of a finisher, capable of scoring and making the last pass.”