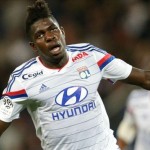 Foot Mercato reported that Manchester City, Arsenal, Tottenham, Southampton and Everton are all tracking Umtiti leading up to the summer market.

Everton have shown firm interest and are expected to make an offer for Umtiti closer to June.

“I heard that, even if I do not read too much press. It is rather flattering,” said the defender.

“This gives me more strength. People see the work I do. But I blossom here at OL, where there is still much to do.”

Arsene Wenger Delighted With The Progress Of Carl Jenkinson